BMP, MTV and different memorable real world seasons cast are having talks to be reunited including the first one. That's what Amaya from Real World Hawaii  was tweeting about a few weeks ago: 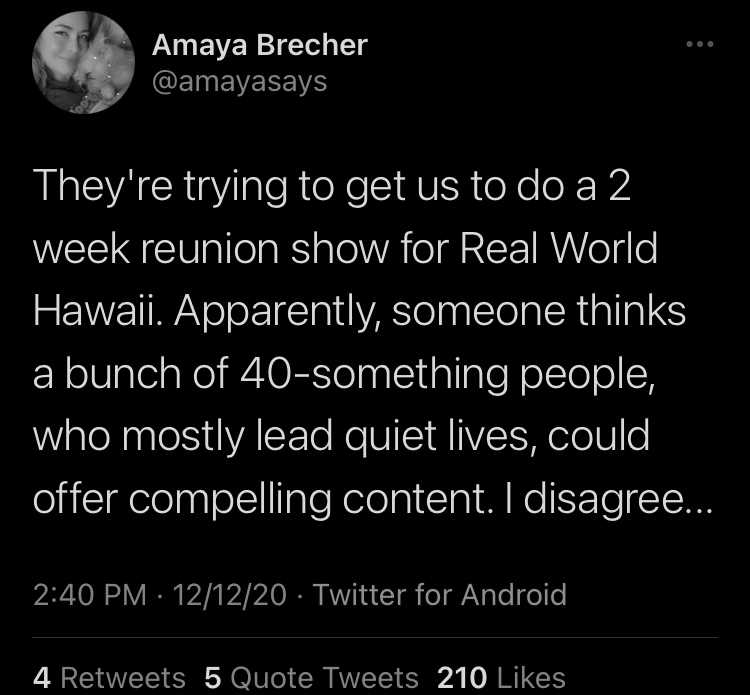 This could be fun but not a great cast to start with. They'll have to reunite Vegas II or Austin if they wanna start with a bang.

I'd love to see a return of Real World but without the gimics - but I too think Road Rules would be better.  I think it would give them action/adventure with missions and the drama/hookups with the RV.  I mean they aren't airing much of anything on MTV outside of Ridulousness so taking a chance on a new season of Road Rules I think could work.  I thought the was X-Treme was made was perfect having them replace cast members if they fail more than one mission.   The concept would definatly work they would just need to execute it and promote it correctly.

Something with like a Below Deck (on Bravo) spin on it could potentially work depending on the cast. I think they'll definitely have to format the show completely different than what it was back in the day. People care more about the relationships within the cast and reoccurring social dynamics/drama than the missions and prizes.

People also get bored watching people live in a house and party. Plus, you can't have as healthy open discussions these days. So they need a show that will create drama based on circumstances.

Lol MTV would never allow ridiculousness to be off the schedule.

People also get bored watching people live in a house and party. Plus, you can't have as healthy open discussions these days. So they need a show that will create drama based on circumstances.

exactly they'll have to actually be out doing stuff and being social and creating conversation. Those Bravo shows do a great job at building discussion and beating at that specific topic to death to make content.

I just finished watching Hawaii for the first time (I bought it from a rando on the internet and it's not in a shareable format, sorry) and I wanted to share my thoughts.

The first half of the season was GREAT, but the second half was a little lackluster as it tended to focus on the less interesting/engaging cast members. I think the season actually lacked big moments/drama. There were some, like Ruthie's alcohol issues and Colin/Amaya's up and down relationship, and there was actually indeed a lot of drama, but most of it was just... petty bickering, and not super entertaining. Probably really entertaining in the 90's lol, but to me as a reality TV fan, the back half especially was kinda meh although, like I said, I found the first half of it to be great.

Ruthie was just... amazing. Like she was SUCH a good casting choice. First of all, if there was Bad Girls Club in the 90's, she DEFINITELY would've been cast for it. And I didn't expect that at all considering she was pretty tame/chill on all of her Challenge appearances. But she was just... lowkey out of control and didn't give a DAMN about what anyone else thought lol. It was really great watching her grow throughout the entire experience. You could literally see her growing and understanding herself and having a healthier relationship with herself, especially after coming back from the alcohol program. It's really what the show was all about. And it came pretty full circle to her helping Amaya at the end. She was just a genuine person and unapologetically herself in all of the good and all of the bad moments and I really appreciated that.

Amaya was actually a really good casting choice too! I was too young at the time to be into MTV, but from being a fan of Real World for going on 12 years, I kind of got the impression that viewers at the time found Amaya annoying? And I.... didn't really get that impression. Okay, yes, she could be a little airheaded or sorority girl-ish but it was all harmless. I feel like the editors set her up to be the butt of the joke in the Colin/Amaya relationship and then the weird drama between her and everyone else at the end of the season, but... I think she actually came out of all of that looking like the victim? Colin was clearly their golden boy and they set it up to be like "Oh Amaya is the crazy girl who won't leave him alone" but he was seriously so mean to her and nothing was ever shown on her part to warrant that type of behavior... And then, at the end of the season, Colin's friend visits and it's insinuated that he and Amaya hook up (even though both claim they didn't and I kind of believe it because no incriminating footage was shown and you KNOW the cameramen would've been all over that). And all of the roommates (sans Ruthie) just... gang up on her, start being just outright mean to her and excluding her. And she almost breaks down, but Ruthie helps her find strength in herself to stand up for herself, and it's actually really touching. And I feel like the editing slant was against her, like the viewers are supposed to hate her but again, I'm like... I felt really bad for her?? And like she was the victim/underdog? And it was really nice watching her journey to being comfortable standing up for herself.

Kaia, at first I thought she was great. She was really confident, she had compelling storylines, an interesting personality, plus a BANGIN' body. Then she kind of devolved into this... weird, frumpy, contrived, rude hag. Like seriously she just became SO unlikable. Even her appearance went downhill, as shallow as it is to judge. It was just a weird transformation. She was especially vile towards Amaya at the end and it left a VERY bad taste in my mouth.

Okay, but seriously, was the male casting pool in 1998 that bad? Road Rules that year struck gold with Veronica, Pua, and Ayanna but struck out with Pawel, Shawn, and Yes who all three were boring as sin. And the Hawaii guys were not too much better tbh. Honestly, if I were in charge of casting, I only would've let Colin, Teck, and Yes on their respective shows and recast every other guy.

I'll admit Colin was pretty funny, but overall he was just a smart *** 19 year old. And tha'ts all there really is to say about him.

Teck was cool. He wasn't, like, the deepest person, but he was unabashedly himself. Just a real life-of-the-party kinda dude who was HILARIOUS and had a natural charisma.

Justin was just.... why was he on the show?  He seemed like he was miserable the entire time. He was mostly irrelevant until like 2 episodes before he left, where he like... tried to adopt this weird villain persona? But then it didn't even really work and wasn't memorable at all, and then he just quit the show and no one missed him.

Going into the season, I knew pretty much nothing about Matt. And I was open to liking him. But Matt was just... weird as hell! I don't even know how to describe him? He was just this kind of self-righteous dweeb who thought he was SO important/cool but he wasn't. Lol. The thing I couldn't stand about him, and which Ruthie accurately clocked at the end of the season, was that he acted like he was SO concerned with his roommates and he wanted to help them and stuff but it wasn't genuine. He just liked to stir things up and be in the gossip, and that's what's ironic about him going off on Amaya at the end of the season for "spreading negativity" amongst the house when HE was the one who acted nice to everyone's face and talked behind their back. Also he was just weird as ****. I'm sorry. I don't know how else to describe it. He just made me so uncomfortable.

Great breakdown of Hawaii. I'm curious how I'd see Amaya now. Justin and Matt were two of the worst casting choices in the history of the show. Only think I disagree with at all was I didn't think Yes was boring but you said you'd still cast him so not a big disagreement.

Great breakdown of Hawaii. I'm curious how I'd see Amaya now. Justin and Matt were two of the worst casting choices in the history of the show. Only think I disagree with at all was I didn't think Yes was boring but you said you'd still cast him so not a big disagreement.

Yes was on the boring side (still the best of the guys that season), but also very likable... and attractive. Lol.

Where can I watch old real world seasons?

Who was the girl that got production mad because she kept changing her clothes multiple times per day? Was it Violetta or someone else?

Who was the girl that got production mad because she kept changing her clothes multiple times per day? Was it Violetta or someone else?

yeah I'm pretty sure it was queen v

I didn't listen to it but someone on The Challenge Reddit said 20 Pack from I love Money/I love New York was on Talk of Love and said he was supposed to be on The Real World: Denver but got dropped right before filming.

Nice. I remember when i used to lurk here he wasn't allowed his own thread right?

Hollywood though is a season i can never watch again though.  I tried to watch a few episodes but knowing what happened to joey i can't. Especially cause every episode it was "i dont want to die young".

I really would love to see Key West get reunited in their old home cause you are actually able to rent it out. I really liked how NY's homecoming was in the original loft so id love to see seasons who can get back together in their former homes reunite