Taylor and Monte both made the same amount of mistakes in the F4 veto, Monte just found his first. So studying wise I would say they're equal, but usually there's a physical component which will give Monte the edge

Let me go find my post when I told y'all Taylor is getting third and all y'all clowned me lol #NeverDoubtATimsterIntuition. Y'all don't share the same knowledgeable ancestors that I have. It's modern Big Brother. The worst outcome will always happen in the game. Which means a Monte win if that's what the fans least want at this point. Enjoy your winner!

It's **** production because they kept her up nearly the whole night

and all 3 episodes were good

lol never get your hopes up for this awful show. Only thing non casual fans can get their way is Americans favorite nowadays

Janelle has been messy on Twitter lately I'm surprised she didn't spam for Michael but she knows she'd get lit up.

As a non watcher did Taylor even do anything cause on paper looks like she just kinda floated within her alliance. Is there any chance Turner thinks he can beat her over Monte? He seems like he'd do anything to win

Someone go back and figure out what comps Michael would've won if he stayed. I still say she should have kept Michael. 2nd is better than 3rd and from our perspective she had a shot since jury had beef with Michael but she wouldn't have known that

People are so obsessed with taking out people who win everything. That doesn't mean they'll win the whole season. Same with Survivor. 42 proved immunity ****** don't mean they're a jury favorite

Someone go back and figure out what comps Michael would've won if he stayed. I still say she should have kept Michael. 2nd is better than 3rd and from our perspective she had a shit since jury had beef with Michael but she wouldn't have known that

He would've won everything else lol. Even if she voted Michael to stay there's still Monte and Alyssa's

I realize that Vevmo loves Monte but Twitter hates him lol

I realize that Vevmo loves Monte but Twitter hates him lol

Twitter is a bunch of nerdy, faceless losers who have unhealthy obsessions with strangers that they stalk 24/7 under the guise of defender and fan accounts. Societies worst humans live on twitter because it's so anonymous.

Brittany's post interview is up. Taylor tells her to sway the jury in her goodbye message and she responds with

"i'm conflicted, i want to vote for the best player regardless. That's because i enjoy this game so much"

Kaycee is rooting for Monte 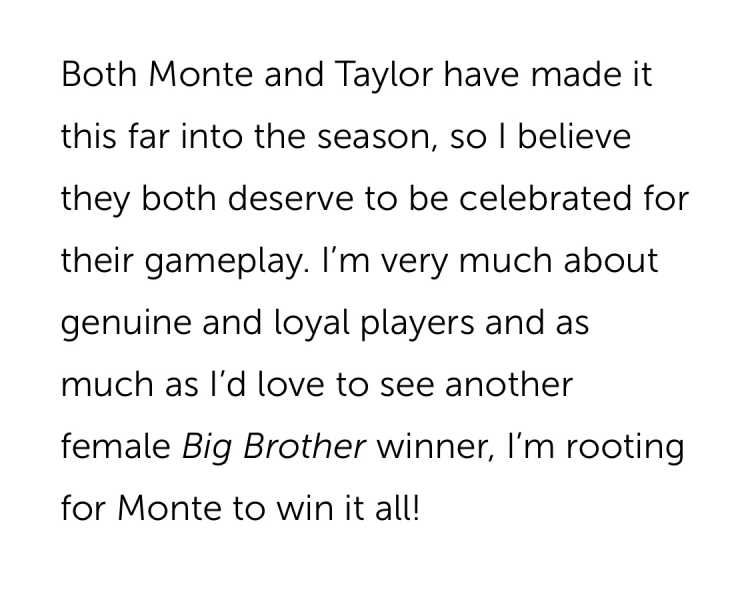 kaycee is so misogynistic

so if turner wins he isnt taking taylor?

taylor should have known going to the end with monte and turner, two comp beasts.

she wins AFP though and gets the janelle third place boot, that's better than going home first

Taylor lost to Monte by 21 seconds. 21 seconds that could've been made up for had they let her get enough rest (:

Oop, Turner told Monte he's not taking Taylor for F2 (stupid), but Monte lied that he hasn't had any convos with Taylor about taking each other.