Good Evening Viewers and Houseguests! Here is where I will keep you guys updated about the Vevmo Big Brother House (hosted on Discord)!

If you'd like to be a viewer in the Discord you can join here: https://discord.gg/RxP6h7X

I look forward to hosting this competition!

Small reminder on who your Houseguests are:

The FIRST HOH competition of the summer is underway. Who will be the first HOH?

Here is what the competition is, it's a throwback for sure and I was inspired by the first ever HOH of BB USA!

Round 1: Briqsquad was randomly picked to spin the wheel first. He landed on "Bitchiest." He must now choose the two Houseguests he thinks are the Bitchiest. Briq chooses White Skull and Impish. Impish wins the vote 7-6 by the House! White Skull is elminated. (15 Houseguests Remain)

Round 2: Impish spins the wheel and it lands on "Coolest." Impish decides that E and Briqsquad are the Coolest. The house votes and Briq wins 7-5 causing E to be eliminated from the competition. (14 Houseguests Remain)

Round 3: Briqsquad gets to spin the wheel again and it lands on "Funniest." Briq claims that the two funniest in the house are Calogero and Impish! Impish wins by a vote of 8-0 eliminating Calogero from the first HOH! (13 Houseguests Remain)

Round 4: Impish spins the wheel again and it lands on "Mysterious." Impish chooses Don and Briqsquad. Don gets the most votes and Don is deemed Mysterious! This eliminates Briqsquad from the competition. (12 Houseguests Remain)

Round 5. Don gets to spin the wheel for the first time and it lands on "Manipulative." Don states that RMD1 and Ceej are the most manipulative. The house votes and RMD wins the vote 7-4, causing Ceej to be eliminated. (11 Houseguests Remain)

Round 6: RMD steps up to the wheel and it lands on "Kindest." He chooses Alad and Vova as the kindest Houseguests. The votes come in favoring 7-4 in Alad's favor, eliminating Vova! (10 Houseguests Remain)

Round 7: Alad spins the wheel. It lands on "Scariest." He looks around the room and decides that Chicken_Breast and RMD are the scariest Houseguests. RMD wins the round with 8-2 votes. Leaving Chicken Breast out of the running to win. (9 Houseguests Remain)

Round 8: RMD spins the wheel again and it lands on "Smartest." He chooses Alad and Don. Alad wins in a 6-4 vote. Don is eliminated (8 Houseguests Remain).

Round 9: Alad spins the wheel (he's doing this a lot now) and it lands on "Liveliest." He chooses Stan and Cole. Cole wins the vote 8-4. Stan is eliminated (7 Houseguests Remain).

Round 10: Cole spins the wheel and is super excited about it and it lands on "Crudest." Cole decides to choose Impish and James. With a vote of 7-2, James is voted the Crudest. Impish is eliminated from the competition. (6 Houseguests Remain).

Round 11: James spins the colorful wheel and it lands on "Fiercest." He chooses Trinidad and Cole. Trinidad wins the vote 7-1! Meaning Cole is eliminated from winning the HOH! (5 Houseguests Remaining).

Round 12: Trinidad gets to spin the wheel for the first time this competition. It lands on "Disloyal." He chooses James and PurpleTank. In a vote of 9-1, James is deemd the most Disloyal by his fellow Houseguests. PurpleTank is eliminated (4 Houseguests Remain).

Round 13: James spins again and it lands on Clingiest. He chooses Alad and Trinidad. The house votes and it's 5-5, causing James to break the tie. James chooses Alad as the Clingiest causing Trinidad to be eliminated. (3 Houseguests Remain).

Round 14: Alad has no choice but to choose James and RMD, no need to spin the wheel. The Houseguests vote and choose RMD! James is eliminated.

Round 15: The Final Vote Between Alad and RMD takes place...The entire house votes and by a vote of 8-6 ALAD WINS HOH!

LMAO MY bad i didnt know we were allowed to post here!!

For those keeping up here on the threads....

Alad, as HOH, nominated Cole and Stan for eviction.

It was then time to pick players for the VETO competition. Alad (HOH), Stan and Cole (Nominees), and three other Houseguests randomly chosen to play (Impish/PurpleTank/James). Alad drew the "Houseguests Choice" and chose James to play. 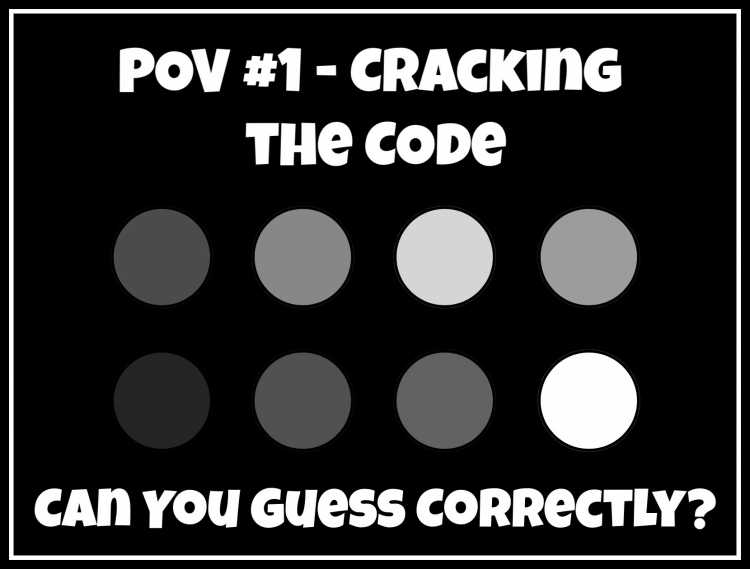 Hello houseguests! Welcome to the first POV competition of the season! And this one is all about your logic and deductive skills! This game is called Cracking the Code (just like the famous board game Mastermind) and you may have guessed it, I am the only one with the code. Here’s how it’s going to work. The goal is to break the code which consists of four colors that I have chosen previously. Whomever can do this in the least amount of rounds will win! Each round, I will tell you how many you have in the exact spot and how many you have correct, but not in the right spot. I won’t be telling you which ones exactly are right though that’s the tricky part. This will give you a clue to how many you have correct, etc. If you have any other questions please don’t hesitate to ask! Let’s get started…

PURPLETANK won the POV and decided NOT to use it! 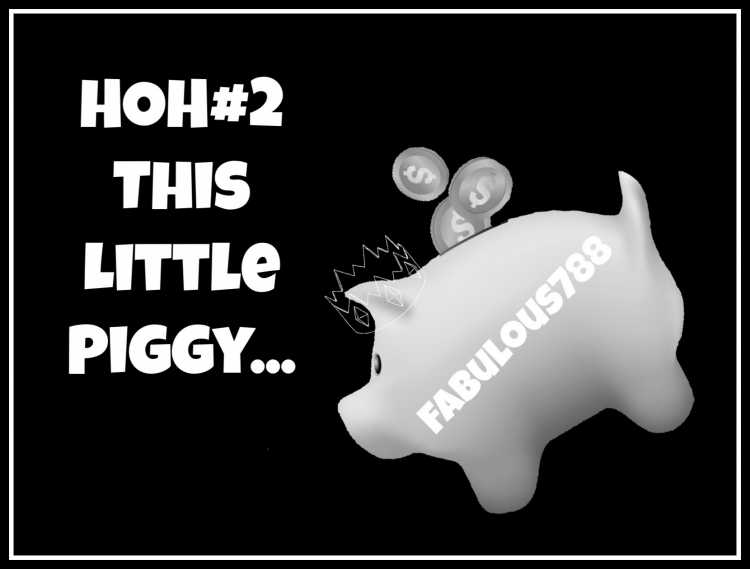 Good Evening Houseguests! For this competition you will be stuffing Piggy Banks Full of Coins! Alad, as the outgoing HOH you may not compete. As you can see each eligible houseguest has a Piggy Bank with their name on it. Each Houseguest will be getting 100 Coins. Your job, to divvy up the coins how you see fit. The only rule is you must give each Houseguest at least 1 coin. However else you place your coins is up to you. Please send me a list of every houseguest and however many coins each person will be getting! Once you submit your list you cannot change it, so please think carefully how you want to place your coins. The houseguest with the most coins at the end of the competition will be the winner.

The competition went pretty smoothly and came down to the wire between two Houseguests. Here is the outcome!

Ceej is the 2nd HOH!

Ceej chose to nominate Cole and Vova for eviction.

Damn the dynamics have def changed.

Hello once more Houseguests! Welcome to the second POV competition of the summer! Below, you will see the game board that will be used for this competition! There are seven color rings: Red, Orange, Yellow, Green, Blue, Indigo and Violet. Each color ring contains numbered squares, red with a range of 1 to 48, orange with a range of 1 to 40, and so on. Beginning on the red ring you can bet which squares you think nobody else will choose, and if successful you win its point value. You may discuss this amongst yourselves and possibly trick your competition into picking the same numbers, etc. This is logic, luck, and deceit!

For example, you choose square 42 and nobody else does: you would win 42 points. If someone else does choose the same square, no one will get those points.

How Many You Can Pick Per Ring!

Final Square: If you want to take the ultimate risk, you may also choose the inner violet-colored square, which is worth 100 points. If you are the only person to choose it, you would, of course, win those points. BUT if two or more people choose to take the risk, those people would lose 100 points from their total. Whichever Houseguests earns the most points at the end of this competition, will win the Power of Veto for the week!

RMD won the Power of Veto and decided that he was going to SAVE Cole. Cole came off the block and Ceej named DON the replacement nominee.

Yup, it happened. For real.

Lmao second place is just as bad as last. If not worse, bye

Lmao second place is just as bad as last. If not worse, bye

I worked all weekend so I haven’t been able to update. But I will soon.

E was evicted. 9-2. The HOH was that they had 48 hours to unanimously come to a decision about who the new HOH would be or I would random.org the nominees as interim HOH.

Impish and Ceej were nominated by random.org

Ceej quit. So the past 24 hours have been not good. Figuring out what I’m doing next. More than likely E/Don/Stan will be competing to take Ceej’s spot.

Y’all rly should be in this discoed cause the updates don’t do it justice.

Then why didn’t you quit before the competition then? Because that was part of the HOH rules...

Then why didn’t you quit before the competition then? Because that was part of the HOH rules...

Don't bring people back.. that's what he shall not be named did and why it went to shit.

imagine quitting when you could have just won the veto