Finally got into this and have to say I really like Kiki.  An underdog with a fun personality. I thought it was funny she cut off her g-string in the middle of the final lol. I also like Brittany and Brooke B. Brooke J didn't provide much except competition. Emily is lowkey cracked and Cyrell was a mess lol.

As for the guys, Troy also didn't provide much besides competition. His elimination against Konrad was entertaining. It's giving Joss vs Derrick 2.0. Jack left a little too soon. His personality was also fun, and he was a decent competitor. He made the elimination Laurel/Jakk and Jordan/Aneesa more enjoyable. Grant is such an *** lol. And whew, Marley is so fine.

Now for my question, was it a cast member that snitched on Ciarran cheating? Cuz I know pink didn't do spoilers for the international versions lol

Connor should have maintained his "villain" role and waited right by the finish line long enough so his friend Brooke J would have won. That would have been an all time move

Connor should have maintained his "villain" role and waited right by the finish line long enough so his friend Brooke J would have won. That would have been an all time move

Now that you mentioned it....

What rating system do they use in Australia? Is it more accurate than our fake Nielsen system? Cause I bet this is how viewership for the MTV challenge actually is but they make it seem more popular than it is. 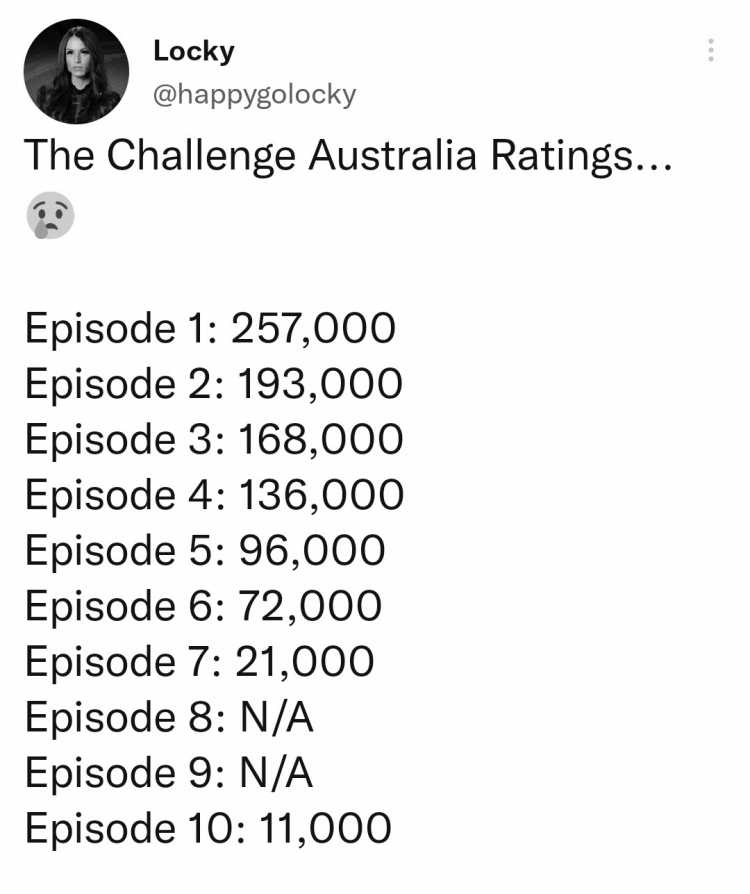 Go woke go broke it all started with the host

I heard it got better but that why you need a good premiere and second episode.

Brihony was a good host I liked it

Please keep personal attacks outside of other vevmo threads that doesn't have to do with the games & storylines for it. These other threads are totally about specific shows , cast members of it or speculations.

Such an amazing season and proud of Kiki.

Something about Konrad kicking Troy *** didn't seem right idk I loved it but it should be something in the rules that deliberately say you can't seem like your intentionally beating someone a** idk, even Joss vs Derrick seemed less brutal idk but it was amazing to watch, glad Troy outlasted him!

i felt extremely uncomfortable when konrad was smashing troys head onto the ground...if that were anyone else it could've lead to a very serious injury

Just started watching this on Parmount + in the UK. Show itself is fine but it I'm really surprised they're using the same challenges as Ride or Dies. It makes sense cost/production wise. But we've seen it..... It's as if they don't expect people to watch both.

Are the other Global spin offs using the same?